The urge to travel all over for beer has grown immencley with every trip I take and every bottle I open. My husband and I have began to check Kayak regularly for weekend trips to PDX and Seattle since our local airport flies directly there and now San Diego. It’s almost silly NOT to go away on our weekends. We have traveled to several different states and visited over 300 unique breweries. We’ve met some stellar people, enjoyed amazing beers with brewers and owners, and shared in the love for craft beer. Many of the greatest breweries in the world are right here in my backyard {my opinion of course} but there are an astronomical amount of great breweries out there and much of that beer is impossible to find in Northern California. So what do you do? Well, you trade. I send you beer and you send me beer and it goes on and on like that. But what happens if one of the beer traders becomes a traitor and goes back on their word, keeps your fantastically unique beer package, and does not reciprocate? Do you cry over the beer that could have been? Stomp your feet because you forked out the cash at your local pub and beer shop on beers you let slip away for nothing? Or do you you stalk the person until they cave?

My first and only experience with beer trading has come to a halt because the man on the other end has not kept his end of the bargain. We met at a brewery I really, really enjoyed while on vacation {in June} with my family in Denver, Epic Brewing. 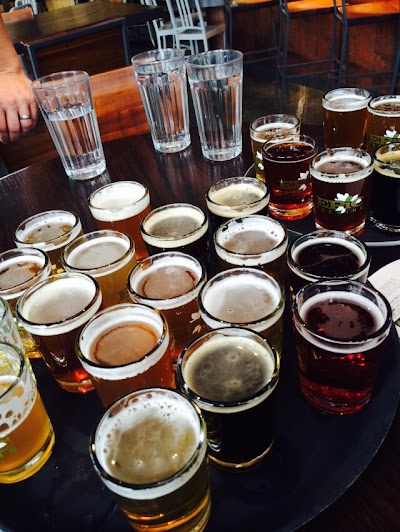 We met said trader when he and another gal poured our beer sampler for us. We sipped then we scattered throughout the brewery as we picked out all the beers we wanted to ship back. Said beer trader mentioned that he would be happy to ship our beers {that we purchased that day} to us and that we should also start a beer trading relationship because he loved Pliny and anything from Russian River. Well, I don’t know about you, but if a person who knew their beers, who seemed like a well respected person in a brewery offered and asked to begin a trading relationship, Id do it {I did do it}. Finally our beers came {the ones we purchased}. Said beer trader sent me the total cost for shipping along with the beers he’d like. I went on my way to my local spots, Russian River and Beercraft to pick out a case of some really great loot to send him. I send the beers, email the contents to him and wait…and wait…waiting still.

He received the beer.

I emailed and asked about the ETA of our beers heading back this way. Said beer trader asked me for a list of beers I wanted. I said, “Funkwerks, anything from Odell, anything hoppy, and any sessions”. Seems simple enough and totally doable?! I got the cold shoulder, then I heard that he was tight on cash and had to wait until after GABF. Then after GABF {for those who don’t know, that’s in October}, he emailed me and said he had beers to send off and would at the end of the month. Then  I was occupied with family for Thanksgiving and when I returned, I emailed again, asking about the beer. Checking in, really. Finally after email, after email, after email… I was encouraged by local beer friends to get in touch with said beer traders manager because he was using his resources at Epic to falsely encourage people to trade with him. I heard back from the manager and said beer trader… she was nice and apologetic {I prefaced my email with, “I do not want anything for free but I’d like you to know…}, and HE was so rude it was hilarious, “I’m a guy in my twenties and I cannot just meet your demands for beer”. Wow. That came a s a surprise to me since I was not demanding anything specific and I’m also in my twenties. To cut it off, I asked him to just make good on his end of the bargain and send me a check. Let’s forget about the beer {quite honestly if he had IPA’s for me back in July or August then they’re not as fresh now…}.

Ready for the finale?

I have heard squat from him. His manager emailed me in a very political email saying that Epic has nothing to do with this trade {which they don’t but the brand is still tainted in my mind because of beer traitor} and she hopes I will continue to buy their beers, also, my beer traitor’s last day at Epic is next week. Well isn’t that convenient? I have his contact information for work. Now, since I mailed him beer to his home, should I start writing him letters? Do I contact him time and time again because it’s the principle, you should never rip someone off?  Or do I just write it off and let karma take over?

What would you do? How does one recover from such an ill experience?

Beer culture is a great culture and people like this should not be allowed to be a part of it. Beer is about passion for great beers, fun, and sharing.

Unfortunately now, I cannot bring myself to buy anymore Epic beer. And while I have always loved their beers and I see them all the time at Beercraft, I will not buy them and I end up sharing this story with all of my beer friends. It’s a shame. I can only hope that my beer traitors boss will regulate the way her employees are able to beer trade while at work with the customers that they would not have known had it not been for the brewery. I would have never met said beer trader had I not been going to Epic in the first place, therefore it’s a little bit Epic’s responsibility to provide some sort of solution.

The takeaway: if you want to trade beer then, trade beer and be fair. Don’t be a beer traitor.

4 thoughts on “Are you a beer trader or a beer traitor?”