With the baseball season in full swing and having been to three games already since home opener on April 8th, I thought it would be fitting to describe a bit of ballpark etiquette {in my humble opinion of course}.

If you’ve ever been to a Giants game then you know that most anything goes. You can dress in the most insane attire, dye your hair or wear a wig, paint your face, drink your beer while walking down the street and in the parking lot, talk to strangers because they are fans as well, photo bomb other peoples photos, pull up at 10 am and crack open a brew, and leave your bottles on the ground in the lot. All of these things are acceptable because everyone wants to get on the big screen to show off their cool outfits, there is only so much time to tailgate, and there is a guy who comes around picking up the glass to make some money. 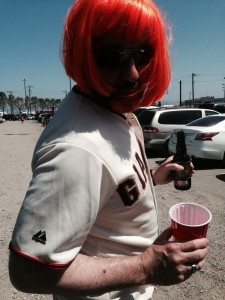 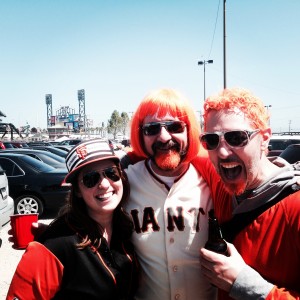 After a full season of many games last year, I got to thinking about all of the things that would make everyone’s time at AT&T Park more enjoyable. I figure if the Giants can train us to clap when they play a special tune   and cheer when the batter needs more love  or yell and scream “Dodger’s SUCK” even when we are not playing the Dodger’s, then we could train each other on what not to do at the ballpark. So here goes:

1. Don’t stand in the way of cars or continue playing catch in the parking lot when people are trying to park. Everyone is looking to have a good time, so be courteous.

2. Don’t leave trash out in the parking lot, just leave your glass {Recycling}.

3.Don’t smoke in the line to get into the park, it’s rude and gross. Children are around and someone could easily be burnt with your cherry.

4. Don’t stop in the stairwell, have your ticket out and know your section ahead of time so you do not have to stop continuously in front of people while trying to get to your seat. If you have to stop, walk to the side.

6. Don’t charge at people while walking, move with the crown and move your body to the side to be courteous when passing by in a crowd rather than hitting someones shoulders.

7. Don’t walk through the crowd and eat your fries or hot dog. You may think you can walk, look for your section, talk to your friend, AND eat, but you can’t, you’re slowing everyone down and you’re going to spill on someone else.

8. Don’t encroach in the persons space sitting next to you. Seating space is minimal, spare.

9. Don’t put your beer in front of someones feet in the bleachers or anywhere.

10. Don’t be this guy at a game: standing up and heckling at everyone else in the section especially if you are not in your home stadium…. 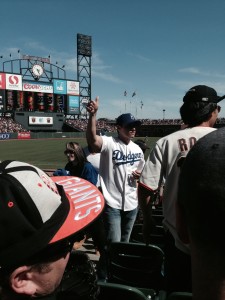 11. Don’t start unnecessary drama with anyone from the opposing team. This is a family fun activity, children are present, alcohol is involved; nobody needs it.

12. Don’t push and shove at the end of the game when leaving, we are all going to the same place. It will not get you anywhere faster.

13. Don’t get angry if someone photo bombs you. It’s funny. 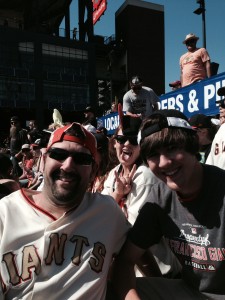 14. Don’t be annoyed if the kids and people around you are chanting and cheering for the players, it’s a baseball game, we are supposed to do that!

15. Don’t freak out when someone is sitting in your seat, just ask them to move.

16. Don’t cuss at players, even if they are Dodgers or Brian Wilson.

17. Don’t wear a Brian Wilson jersey or shirt. I know it cost you money, but he’s a trader and as a Giants fan, it’s just not right. 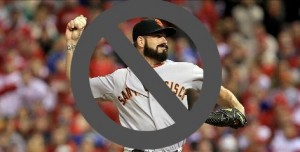 18. Don’t sneeze or cough without covering your mouth while walking in the crowd, sitting at your seat, or anytime! There are enough germs floating around.

1. Do move over when people are trying to get to their seat in your row. Stand up, let them by.

2. Do watch out for small children when walking in the crowds.

3. Do pick up and carry your small child if they’re tired and can barely walk.

4. Do root for your home team regardless of what section you are in!

5. Do know where you are sitting.

6. Do know the chants. Know when to sing along. Be excited. Show the love.

7. Do be prepared to move if you are sitting in someone else’s seat. We all like to move a little closer and for the most part,it’s totally acceptable especially if there is nobody sitting there, but realize that there may be and they may be back.

8. Do have your I.D. on you and be prepared to show it anytime you are buying alcohol. Two drinks per person at one time.

9. Do look down the rows of bathrooms for open stalls, most of the time more are open than you might think, you have to just pay attention.

After careful consideration and many days and nights at the ballpark, I’ve decided that many people who are new to the stadium just don’t know how to behave there. It’s up to the seasoned Giants fan to introduce a sort of etiquette. That’s my two cents for a more enjoyable baseball game experience. Go Giants!