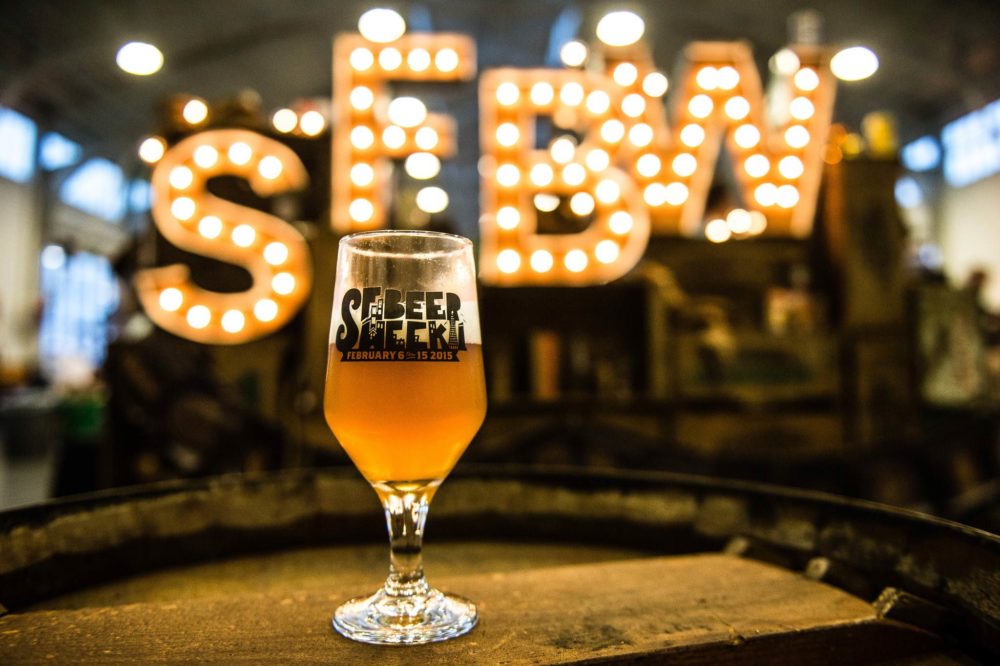 SF Beer week is one of my favorite times of the year; it’s my birthday and I get to enjoy copious amounts of amazing beers from all across the Bay Area and beyond. Beer week is an action packed week filled with beer dinners, beer pairings, educational seminars with brewers and brewery owners, sensory seminars with hops, tap takeovers at various bars and gastropubs throughout the Bay Area, and many events at the source- at the breweries. There are hundreds of options with over 100 breweries in the greater San Francisco Bay Area and the North Bay, we have a lot to choose from.

So how do you pick what to do? As a seasoned beer traveler and planner, I highly recommend you sign up for the itinerary on sfbeerweek.com first. This will allow you to look at each of the events that brewers chose to list and what the San Francisco Brewers Guild are promoting. Find something you like, you simple click, “add to my itinerary”. It’s a great way to be able to check out what you’re interested in each day.

Secondly, these events fill up fast so if there is a need for a reservation or to purchase tickets, do it now. There are over 100 breweries out there and even more restaurants who will be hosting dinners and tap takeovers, but there are even more beer lovers who wish to attend. Get in where you want to get in.

Buy your tickets for the SF Beer Week Opening Gala NOW. Friday, February 10th at 6PM is quite possibly the best beer event in Northern California and you want to be there. This event is well attended by all of the breweries and they have saved their special brews to be showcased that night, for you. Don’t let them down! Get your tickets.

Russian River Brewing Co. – February 3rd. Well if I didn’t mention this then you would think I didn’t know anything about beer because anyone who knows beer, knows that Russian River Brewing Company is releasing the long awaited triple IPA, Pliny the Younger. It’s released once a year for two weeks and they do it in conjunction with beer week. They will be releasing this delicious beer on February 3rd at the pub. The brewers will be bringing it to the opening gala as well, so there should be plenty of chances for you try it.

St. Florian’s Brewery 4 Year Anniversary – February 11th from 12-8PM, they’ll be serving up great eats from various food trucks and vendors, as well as pouring new beers, and there will be live music. More information to come, but this is a good one to get on your list if you find yourself in the North Bay.

Social Kitchen’s Friday Morning Beer Brunch – February 11th from 10:30AM-2:30PM. I LOVE this place, I love the atmosphere, I love the food, and I love the beer. I also really love brunch, it’s my favorite meal of the day and I feel like it does not get the chance to make an appearance as often as it should, so why not indulge on a Saturday?!

The Monk’s Kettle is a super cool beer bar and I couldn’t think of a better place to spend a little time sipping on one of craft beers latest favored beer style.

12-5PM. Have you ever been to Swann’s? It’s AH-MAZ-ING! It’s a hole-in-the-wall little spot that you squeeze into, sit at the counter, and are served by all men who have worked there for generations. They serve fresh food daily and when they run out, it’s out. It’s so worth it, and paired with beer, well, duh.

Alvarado Street is putting out some incredible brews, this is surely not going to be a disappointing way to spend some time.

They will be hosting a series of events throughout the week, enjoy a walk down memory lane with the folks at Almanac as you taste through countless vintages of their special sours.

I have enjoyed many Smog City beers down in the smoggy city of angels and I cannot wait to try this lineup!

Because, well, duh. Single, double, and triple IPA’s will be flowing. Nuf said.

Join in on the fun at the Rare Barrel in Berkeley. These two breweries blow my mind on their own, I cannot wait to see what they’ve come up for this!

Here are the beers:

This just sounds intriguing and I have not been here before, so I’m gonna check it out. Sours, IPAs and secret stuff.

If you have not yet tried the beers from this brewery out of Texas, then get here to try them.

Brunch will be served until 2PM for those who need a little help with the beer week hangover. I can’t wait, they do a great job in the kitchen and have some killer beers coming out, so I will be parking myself there for the afternoon!
So you have some official SF Beer Week events and my recommendations. There are many unofficial events going on in Sonoma County, so check back with me and I’ll keep you up to date with deets.