At first approach, we had a great impression, “beer here” and other signs screamed at us that we were in fact going the right way as we were driving through the warehouse/industrial area leading us right to the correct spot. On more than fifty occasions my husband and I were led to he wrong location either by the bouncy blue dot on our google map or the mark on the nearby map on untapped.  Many breweries really lack in the signage area so it was fantastic to be certain were in the right place.

We were sat in the very center of the room where the door opening every five minutes brought in a chilled breeze. All of the tables on the outside of the room were empty but three so with both of us being in the industry we thought, “hmmm…. Why sit us in the middle and not fill in the window seats?”. Not to mention, I was shivering the entire time. Plus, with just us being in the center of the room, it sort of felt like we were in the way of everything.

We ordered a sampler and right away we were not able to taste all of the beers, they had restrictions so we had to ask in a round-about way to be able to taste all six of their current beers. We were told we could not sample all of their beers because of licensing issues.  We were charged for one sampler (of four beers) then for two samples at $2 each. The cost was normal, the way she presented it to us confusing. Of all of the breweries we have been to it’s customary to taste all beers for $1-$2 per sample. I would highly recommend they adopt that policy.

Our server was nice and friendly but very pushy. We ordered a caesar salad ($11) she asked if we wanted to add chicken, yes. We ordered a burger ($16) for my youngest son and I ordered the French dip ($14) which she asked if I wanted to sub the slaw out for fries for an additional $1. I said no thank you. So odd that you’d have to pay extra for fries at a brewery.
After she took our orders she continued to ask if we wanted to order anything to start and went on to list three of their items that did sound tasty but with the price of everything else, no thanks and secondly, if I wanted a starter, I would have started with the starter….I understand the whole up-sell thing but sometimes it’s too much. Perhaps it works for them but I felt it was un-brewery like.

My French dip had two thin slices of meat on it but the bread was fresh. It was bland in taste and nothing special at all. I would have preferred a big greasy burger or nachos.
The littles caesar salad had chicken that tasted undercooked (it was poached) and it was an extra $4 charge for that chicken {could not have been more than 4 ounces}, bringing his wilted “caesar salad” to a whopping $15. I use the quotes for the caesar because the salad was mostly the leafy green from the lettuce {not traditional caesar} and it was not real Parmesan cheese on top and for that price, it should have been.

My other little had the $16 burger and it was burnt. He said to me, “Jess, this really is burnt. You should write about this,  I would tell them ‘no’ if they asked me if I would try it again”. This is not a picky kid, I mean, he burns his mac n cheese sometimes and eats it. This was a complete disappointment. He was offered condiments: BBQ sauce but for $1 extra.
She didn’t even bring catsup or mustard to the table. We wondered later if that too was $1 extra.

With the whole experience being ruined by the overpriced food and irritation that anything extra was $1, we all sat there and talked about the other many breweries we have been to across the U.S. and compared. My husband is a growler maniac, he has to have them from everywhere we go. So I bet him that the one here at Napa Point (after the experience) was $20 empty and $18 to fill. He was so confident that it was $24 total {depending on the beer}. Well…. Let’s just say I was the one getting a high-five from our kids for being SPOT on about the cost. In the beer industry, in California, we would be paying $38 for OK beer and to take home a piece of glass {that I know cost them under $10} to promote them further and come back to fill it? No thank you.

The growlers ended up not even for sale filled anyhow. The server (of course) said that we could buy the glass and call them every week to find out if we could fill it that week! And drive out there for their beer and service? I don’t think we would be able to afford to travel for other wonderful craft beers if we made a habit of visiting Napa Point. The beer is alright but for the prices ($6 for one pint….) the beer should be exceptional. It is just outrageous to expect people to pay that much for draft at the source anyway. They need to branch out and visit some other breweries to find out how it’s really done or I imagine they will not be around very long. Yes, it’s Napa Valley but it is the Craft Beer Industry!

The best part about my visit to Napa Point was my Untappd badge I got while there. 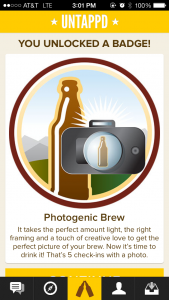