Skip to content
— CRAFT BEER BLOG, MY DASH, TRAVEL —
Reuben’s Brews
This was probably the brewery that came most highly recommended. After landing at 1pm and hitting three places, talking to the locals, everyone said that Reuben’s was the place to be. We had to hit them on Sunday before 6pm so we rushed over there. The place was packed with happy people sitting in the sun within the roped off patio and people enjoying their beers inside the small brewery. We sat next to a very sweet couple who shared a lot of good information with us about the local area. The beers were fantastic. I fell in love with their Imperial Rye IPA. They had a special triple IPA on draft while we were there, it was amazing. The tasting tray was intense, filled with twelve brews and all were well made and tasty. After visiting the sixteen breweries, this place falls in the top two. It was awesome. 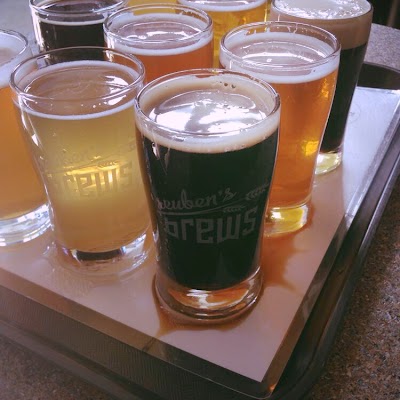