The atmosphere in the Salt House was warm and hip. They have this brilliant art on the wall that was actually painted on the wall- brilliant and really adds to the ambiance.

I enjoyed browsing their cocktail list. I ended up committing to the Boulevardier- woodford reserve, Campari and vermouth- delightful. This drink is right up my ally since I am a huge fan of the Maker’s Manhattan. 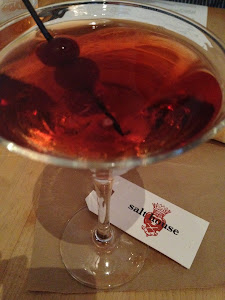 We began our evening of heavy eating with Fanny Bay oysters on the half shell. Simply cannot go wrong with oysters. We followed up with Foie Gras with a strawberry rhubarb sauce. We thought we may as well indulge since that tasty treat is going onto the black market soon. This particular piece was not exactly the way I prefer, it was firmer and more dense than I like. The rhubarb did add a nice component to the overall taste of the dish.

The corn chowder was amazing, every bite {after I added a good amount of salt}.

The steak was cooked very well and just to our liking, again, salt. I was surprised that we had to add salt to each dish considering we were at the Salt House…..

The best and worst part about this restaurant was the chef in the OPEN kitchen. They certainly were giving us quite the show, with my love in the food business and well, me loving food, we watched the open kitchen like hawks. From one of the guys licking the sauce spoon, putting it in a water container and then using it again, to eating in the open or wiping their faces and not washing their hands. It truly was a sight to see.

My guy went to use the restroom and peaked over into the kitchen to see if there really was just one container with water to rinse the serving spoons before we jumped the gun and became disgusted; there was. The cook platting and drizzling the sauces onto the plates reused the same spoon three times that we watched, after licking them clean.
I understand tasting the food because it should be sampled, BUT with a Tasting spoon that is disposed of after each use.

All of the staff were eating around the bar while they waited for their plates to come up. The cooks touching all of the food and preparing things that we {the paying consumer} ate, all wiped their face, nose, cleaned the sweat off their head and not once washed their hands.

One cook who seemed to be the leader {but we were unable to tell} was setting a good example just before we were about to leave by wiping his face with his sleeve. That was great, we thought, well, there is hope for this crew yet! No, that’s when he took off his bandana and wiped his entire palm all over his sweaty forehead just before going back to the stove. I was so glad we saw all of this after we ate.

When working in an OPEN kitchen, people need to remember that just because it may seem the guests are engaged in their own conversations, so satisfied with the delicious meal to think about anything else; they may still be watching. Open kitchens are open for a reason, for the show. It adds a different element to the whole eating experience. It’s not meant to make the patrons lose their meal after. While the food was good and the service was wonderful, after seeing the “show” we will not be back to the Salt House.