Celebrating Christmas with my wonderful family couldn’t be better unless you add in mid seventies weather, six flags for the chick-lets and craft beer for the adults: that is a fabulous way to spend a holiday!

In realizing that it truly would be wonderful to spend winter break in the sunshine, we thought Hawaii would be fantastic but then the issues started to arise, “what new breweries would we go to? What roller coasters are in Hawaii?” Well, we could have visited Maui Brewing Company which would have been a treat and is on our list to see, of course. Instead we busted out our shorts and drove down south to indulge in the craft beer industry in SoCal and to buy season passes for our little’s to Six Flags. We were in luck because we all got a pass {four of us} and there was a special running when you buy four passes you’re upgraded to “Gold”, meaning free parking at all of the parks, getting into the park early and access to all of the parks {including Hurricane Harbor}. Well worth the trip.

With the theme park as the goal, we set off with my Christmas list of breweries to stop at along the way.

We had a delicious lunch at Sequoia Brewing Company. I was pleasantly surprised as to how much I really loved my chicken sandwich {The Mark Twain}, I must say, I think it’s my favorite so far. The beers were good too. They only had gallon sized growlers and with my hubby’s problem… we had to get one. The atmosphere was rustic and lodge-like and had an all around good feel.

Next stop was Brewbakers. We were sat upstairs very far from everyone else. The downstairs was very small though and didn’t have a lot of seating, the layout of the restaurant just seemed very odd. I guess you have to make due with your space though.

We ordered the sampler and this was the first place so far that my littlest {actually both boys got them but the youngest is the connoisseur} was able to get his own sampler of their house-made sodas. There was a root beer, cherry and orange cream. All pretty tasty but a bit watery. The beer sampler was not exciting at all. They did have this apple beer that reminded me of a wine cooler when I was younger, sneaking into the cupboard for the fruitiest drink that ended up making me ill. For the non beer lover though, I can see this going over well.

Making our way to Bakersfield: the land of tumbleweeds and thankfully great beer, we stopped at Lengthwise. The place was hip and very cool. This is where old license plates and beer cans went to be loved and showcased for their unique beauty. The food was not out of this world but I gotta give them an A for creativity: deep fried artichoke hearts, southern inspired dressing, salsa, romaine and iceberg, blue cheese and roasted corn. I think the blue was a bit much. It worked for a snack though. 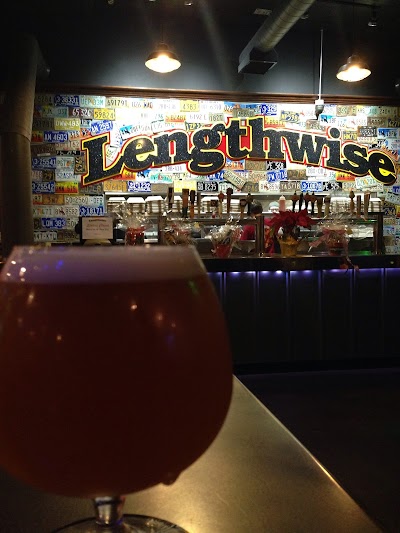 The beer was great. We were of course in love with the IPA’s. The Zeus Imperial IPA was my favorite and guess what… we took a growler of it. The bartender was way cool, he was attentive and even remembered our names when we went up to order- kind of a cool thing. He gave us some stickers to put in bathrooms of other breweries along the way {look for them 🙂 }.

Finally in the Los Angeles area for the final stop before the big day: Wolf Creek Restaurant & Brewery. They did samplers but not in the traditional way that most breweries did, they said they would give us a taste of the others if we wanted. It’s strange, if a place makes beer, don’t they want people to taste the beer? Of all of the places we have been to we {and other beer travelers} have found that it’s great when breweries have a price per taste, that way if someone wants to taste them all, they just pay for it accordingly. Makes sense, then we can taste the craft and walk out of the place.

Our bartender was very nice though and we ended up tasting most of them. Among the favorites were the Desperado IPA brewed with a hop variety including cascade and centennial. The second favorite was the Rebel Rye.

After an early day and a lot of waiting in lines we were ready for some good old fashioned craft beer love. We went over to Kinetic in Lancaster: a very cute town with a lot of cool shops one very awesome  brewery. Right when we walked in I tweeted to them that we were coming and we were stoked to be there. A few minutes later the Owner/Brewer came out and started talking to us like he knew us. He received the tweet and came out to say hello. He gets all of the social action right on his phone and came out and treated us like gold. He told us all about his beers with pride and passion. They were celebrating their 2nd anniversary the next day so they had over twenty beers on tap. Among them were a couple of beers they made in the beginning and saved for this event. The inaugural first gear, batch one was being served and was out of this world. Then they had their Second Gear {for their second anniversary} and WOW. It’s only available there and they do not do growlers of it. We were very lucky we stopped in. We will definitely be back to chat it up with Steve and taste his future beers. Lancaster is a bit of a hike from Santa Carita but if you are in the area at all {L.A. that is} go there- it’s worth the drive!

A few blocks away is Bravery Brewery– a brewery owned by Bart Avery and the “Gunny” from the Full Metal Jacket. The brewery has a “Wall of Bravery” dedicated to the men and women of the armed forces who have served our country. We sat right next to an older gentleman who showed us he was recognized on the wall. It exemplifies pride. The beer was solid and the atmosphere comforting and cool. Aside from their honor and pride for those who served and continue to serve, they have a nice team working their, friendly regulars and games to get people to hang out and drink more beer. I loved the place. Growler four down. AND.. they do tasters! 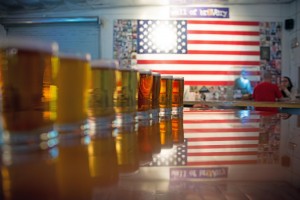 With dinnertime fast approaching we went on the hunt for Golden Road. Again, they only do set samplers of their flagship beers and their IPA’s {they had eight others}. We ordered food and there are not many photos of the food this trip because sadly the food scene at the breweries was not like we are used to. At Golden Road it wasn’t bad: I enjoyed the tomato caprese sandwich. Tomatoes are not in season now but it was still tasty.

The server, Chris was very nice. I think he got the idea that we were into tasting everything they make so he made some really good recommendations and we loved the Mosaic IPA {surprise, surprise}. This place was recommended to us by the owner of Cap and Cork in L.A on Hillhurst when we came down a year ago and stopped in to stock up on our SoCal bottles. The owner saw a four pack of their IPA’s in our cart and he gave us a hat and a couple of glasses and recommended it highly so Golden Road has been on the list for sometime now. Thanks to Chris we were able to taste most of their craft beers, happily.